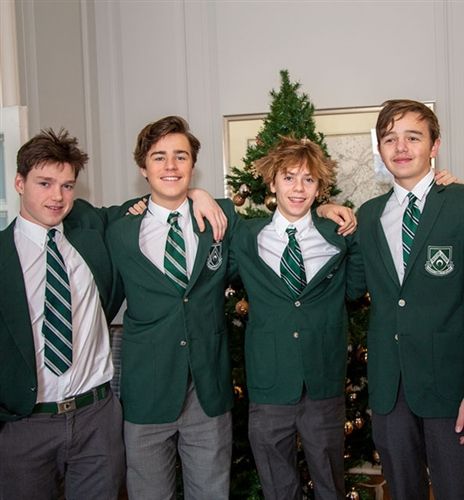 12/19/2019
Crescent’s enrolment grew by two in Fall 2019 when Alex Richardson and Frank Finlayson, both Year 10 students from The Scots College in Sydney, Australia, became the first participants in an international student exchange program being piloted at Crescent. They were hosted by the families of Grade 10 Crescent students Charlie P. Bunker and Andrew Jaques for six weeks starting in late October. This summer, Bunker and Jaques will attend “winter term” at The Scots College.

While they were here, Richardson and Finlayson attended Grade 10 classes at Crescent. They were also introduced to Canadian cultural experiences such as Halloween, hockey and snow.

Most importantly, the program was an opportunity for the boys to build friendships that stretch around the world.

“Coming into Crescent, I was expecting for it to take a couple of days to get settled into life at the school,” Finlayson said. “But the moment I stepped into the halls at Crescent, I was greeted with kindness and love. I have made so many good friends here, and some that I hope will stay friends for life.”

“An exchange program offers students a unique opportunity to experience a different culture and educational system, and build confidence and resilience by living outside the familiar home setting,” says David Grant P’14, Crescent’s Dean of Studies. “We’re excited to see where this pilot program will lead.”