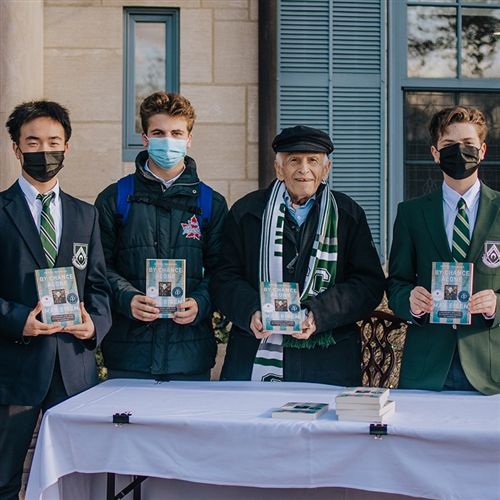 1/27/2022
“I am truly a lucky person to have survived to tell this story.” With these words, Max Eisen launched into the final segment of Crescent’s historic four-part, guided book club of his memoir, By Chance Alone. The book retells Mr. Eisen’s remarkable true story of courage and survival at Auschwitz.

Three pre-recorded videos were released in the weeks leading up to the live event. The videos feature Mr. Eisen in conversation with Crescent students Jamie Bernstein, Jonathan Blackman and Chris Fu discussing a section of the book. The book club culminated with two live, virtual events—one for Crescent students and a second event for parents—where attendees had the opportunity to ask questions about Mr. Eisen’s book and extraordinary life.

The live events coincided with International Holocaust Remembrance Day, which commemorates the anniversary of the liberation of Auschwitz-Birkenau on January 27, 1945. Unfortunately, one week before the Red Army liberated the camp, Mr. Eisen—who spent ten months in the infamous Nazi concentration camp—was forced on a death march to Ebensee with thousands of other prisoners. Liberation finally arrived for Mr. Eisen on May 6, 1945, although he endured harsh circumstances for many more years following the war. “We were liberated, but we were not free,” recalled Mr. Eisen.

In December 2021, Mr. Eisen was appointed a member of the Order of Canada for his contributions to Holocaust education and his promotion of transformational dialogue on human rights, tolerance and respect.

This event was presented in partnership with the Friends of Simon Wiesenthal Center and generously sponsored by the Erdman Family. It is part of Crescent’s commitment to Holocaust Education and ensuring that our young men are taught about and learn vital lessons from this catastrophic and tragic period in history.