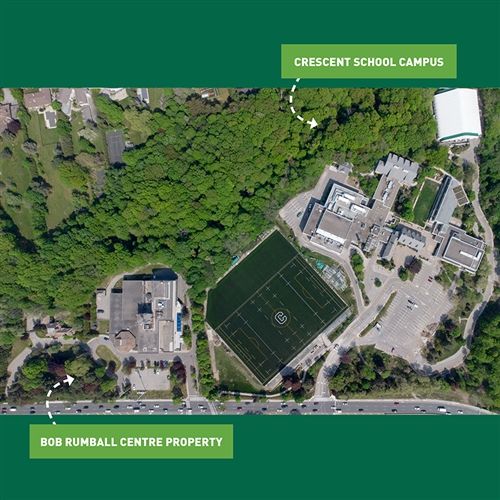 5/26/2021
Thanks in part to a transformational gift from Ming Wai Lau ’97, Crescent School has acquired the seven-acre Bob Rumball Centre property located at 2395 Bayview Avenue, bordering the north end of Crescent’s campus.

The acquisition was announced on May 26, 2021. The Bob Rumball Canadian Centre of Excellence for the Deaf will remain onsite for three to five years before Crescent assumes the use of the property.

“To us, this isn’t about investing in real estate. This is about making a meaningful investment in boys' education. It’s a once-in-a-lifetime opportunity that will forever shape the future of Crescent School,” said Headmaster Michael Fellin P’24. “We are exploring several options for the site, driven primarily by our 25-year Master Campus Plan to improve and expand our school’s curricular and co-curricular programs.”

The Rumball property acquisition is valued at just over $42 million. Ming Wai Lau ’97 has pledged $12 million toward the cost of the property; the rest will be funded through donations and financing.

“The Rumball Centre property unleashes the enormous potential for Crescent School. It opens unimagined opportunities for future generations of students who I hope will benefit from the school in similar ways that I have,” said Lau.

This is Lau’s second major gift to Crescent School and one of the largest single gifts in the history of Canadian independent schools. He was the lead donor in Crescent’s $34 million Great Boys campaign. The Lau Family Wing, home to the Middle School, is named in recognition of his $5 million campaign gift.

The Bob Rumball Centre has been at the Bayview Avenue site since 1977, when it was known as the Ontario Mission of the Deaf. Having outgrown the space, it will use proceeds from the sale to support its long-term objectives for growth and provide best-in-class care for its communities.

“We are thrilled to know that the property will continue to be used to influence and change people’s lives. We could not have dreamed of a better future use for our property,” said Derek Rumball, President of the Bob Rumball Canadian Centre of Excellence for the Deaf.

With the acquisition of the Rumball Centre, Crescent School is reassessing the three phases of its Master Campus Plan, a 25-year vision for the campus development. The first capital improvement of the Master Campus Plan – resurfacing Innes Field with a multi-purpose turf and installing an air-supported sports dome – was completed in May.

Read about Ming Wai Lau ’97
Back