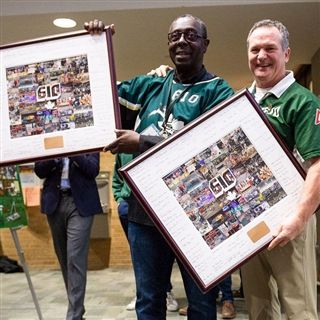 9/30/2020
Team 610’s 20th anniversary event was an evening of shared pride, stories from the past and dreams for the future. Most of all, it celebrated the relationships fostered by Crescent School’s robotics program.

More than 200 people – including alumni, current students, faculty, retired staff members, parents and friends – attended the event held at Crescent on February 22, 2020. They witnessed the unveiling of Team 610’s 2020 robot, Megalodon, and then gathered to reminisce about their shared history.

Team 610 was born in the 1999-2000 school year under the direction of David Grant, who launched Crescent’s robotics and technological design programs. Grant, who is now Crescent’s Dean of Studies, knew that students would be engaged in a powerful way by the hands-on work of designing, building and testing robots.

In the two decades since, Team 610 has earned many awards on the FIRST Robotics competition circuit, including the 2013 FIRST World Championship. Participating on Team 610 members has given hundreds of Crescent students their first steps towards future careers in science, technology and engineering.

At the anniversary event, Grant credited many people who were crucial to Team 610’s success. “Talented and committed teachers, mentors and supporters create the environment for this type of magic to happen,” he said.

That magic is still happening today, said Don Morrison, Head of Robotics. He described how Crescent is adapting its curriculum and co-curricular options in all grades to ensure that students can graduate with cutting-edge robotics skills.

“Our mandate with the program is to be the best in the world, centred around excellence and Character-in-Action,” said Morrison.

The shared Team 610 experience also forms one of Crescent’s strongest alumni-student relationships, said Class of 2012 alumnus Chris Hatsios. He is part of the “Back Seat Drivers Union” – former Team 610 members who mentor current students on the team.

“Through our mentorship, we forge unique personal relationships with the boys,” said Hatsios at the anniversary celebration. “That teaches the hard and soft skills they need not only to build a successful robot, but that they can carry on for the rest of their lives.”

Another member of the Back Seat Drivers Union, Class of 2007 alumnus Jonathan Norris, spoke about his hopes for the future of Crescent’s robotics program.

“Team 610 has been a real agent of change at Crescent,” said Norris. “We see the next 20 years of the robotics program as the growth phase, continuing to turn students into leaders and dreamers, building the confidence that at an early age they could achieve incredible things with small teams and passion.”

To support this vision, the Crescent Robotics Alumni Fund aims to raise $20,000 this year for the robotics program and Team 610.

As David Grant reminded the guests at the event, the impact of the robotics program is about far more than mechanical parts and computer code.

“The robot is just the vehicle,” said Grant. “After all the technical stuff is stripped away, it is about the relationships, the self-discovery, the collaboration, the creativity and the resilience the boys develop. It is about the confidence and soft skills they acquire in taking on big challenges, with no playbook or defined solutions. It's true 21st century learning in action.”