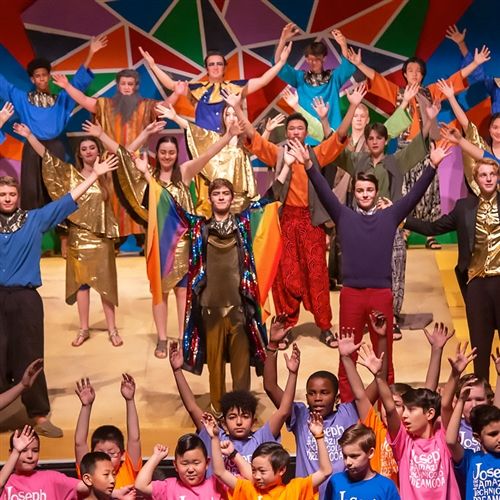 5/7/2020
Amazing! That’s how the audience described Crescent School’s production of Joseph and the Amazing Technicolor Dreamcoat that ran February 5-8, 2020.

Written by Andrew Lloyd Webber and Tim Rice, Joseph is a comic musical about a young man who is betrayed by his envious brothers. Based on a story from the biblical book of Genesis, Joseph’s adventures take him to Egypt, where he becomes an advisor to the Pharaoh and is eventually reunited with his loving father.

In Crescent’s production, Grade 12 student Ethan Ripstein performed the lead role, supported by a cast of students from Crescent’s Upper and Middle Schools, and guest actors from Havergal College. Crescent’s Lower School choir and a pit band of faculty and student musicians rounded out the show. Behind the scenes, Crescent students on the production crew made sure that the show’s sound, lighting, sets, props and costumes were as amazing as the performances.

“Presenting Joseph this year pushed our students out of their comfort zones with a fully sung-through musical,” says Godric Latimer-Kim, head of Crescent’s Arts department. “It also allowed our Drama and Music faculty to collaborate to create an incredible learning experience for our students.”

The talents of the performers were matched by the spectacular sets and costumes, which included a chariot on loan from Scarborough Music Theatre.

Watch a performance video from Joseph and the Amazing Technicolor Dreamcoat

See photos from Joseph and the Amazing Technicolor Dreamcoat