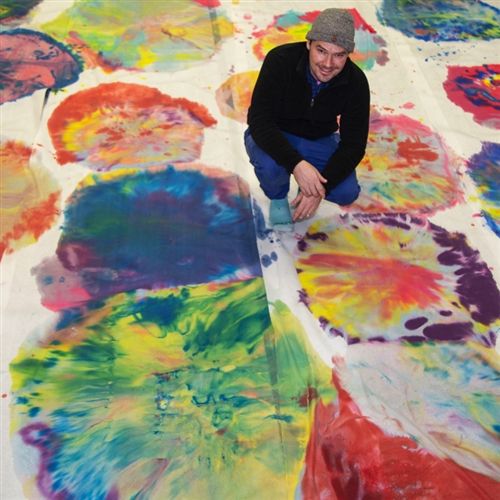 8/22/2019
Filling a two-storey wall in Crescent School’s library for Middle and Upper School students, a dramatic new mural called The Legacy Digest is the result of a unique collaboration between Crescent students, alumni, faculty and a professional artist.

The mural project was directed by artist Patrick Thompson of PA System, which has created public artwork across Canada and worldwide. The Noble-Marks Arts Endowment at Crescent generously funded the project.

Thompson’s mural features massive, colourful clouds and large, handwritten phrases such as “Laugh at yourself” and “Don’t let setbacks be defined as failures, but rather as learning.”

The phrases of advice in the mural come from students’ interviews with nine young Crescent alumni as well as entrepreneur Kimbal Musk. The intent was to pair the boys with people they might otherwise not meet, expanding the advice they get from family members, teachers and guidance counsellors.

“There’s a sweet spot in life where if you are lucky enough to meet the right person and have the conversations that would be best for you to have at that time in your life, certain doorways open,” says Thompson.

Starting January 2019, boys from Grades 4-12 gathered each week after school in the Upper School art studio to create colourful “blobs” by pouring paint and water onto large sheets of fabric that covered the floor. The process was collaborative and messy. “It’s like watercolour for giants,” Thompson told the boys as he guided their efforts.

Meanwhile, other Crescent boys were conducting the interviews and gathering advice and lessons to live by. Typical interview questions were, “what’s something you know now that you wish you knew when you were my age?” and “what’s your favourite failure?” After the students transcribed their interviews in handwriting, Thompson enlarged and screen-printed selected phrases onto the artwork.

The mural was installed on the library wall in a three-day process in March and officially unveiled at Crescent’s LUNA Rising arts showcase on April 12, 2019. There are also plans to document the project in a video and book.

Now, as students study and read in the library, they can reflect on the advice they see in the mural. Thompson says he didn’t want it to be too obvious, but instead “exist peripherally” for people to absorb while they are “thinking about other stuff.”

“The boys’ handwritings and learnings are now on the wall for all to see,” says Crescent arts faculty member Jody Roberts, who worked closely with the project. “I love how it’s so authentically our students’ ideas.”

Lear more about Guidance & University Counselling at Crescent
Back