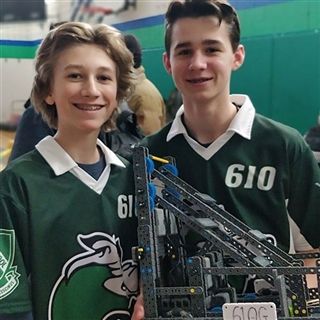 6/3/2019
Crescent's Lower and Middle School Team 610 robotics teams are celebrating personal bests and an Honourable Mention after the VEX IQ provincial championship in Brampton on March 2, 2019.

A record number of eight of Crescent’s 10 Lower and Middle School robotics teams qualified for the provincial tournament. Competing against 66 teams from schools and clubs across Ontario, the Team 610 members earned some notable achievements:
"The dedication of our boys has been incredible,” says Middle School faculty member and robotics coach Katharine Hancock. “Although we are not moving on to the Worlds, we are so proud of the growth we witnessed in our boys in team driving, problem-solving, grit and teamwork.”

At the tournament, teams compete in pairs to score points by using their robots to complete tasks. The tasks include stacking coloured hubs, removing hubs from a structure, and parking or hanging on a bar. Teams also compete in a robot skills challenge, where one robot tries to score as many points as possible.

Crescent’s Team 610 members reached the provincials after success at the VEX IQ tournament in Aurora on February 2. At that tournament, Crescent’s Team 610E was named the tournament’s Teamwork Champions, thanks in part to the consistently exceptional driving skills of their team members. And, along with their partners from the Discobots team, Team 610E was the top-scoring team in all of Canada at the time.
Back