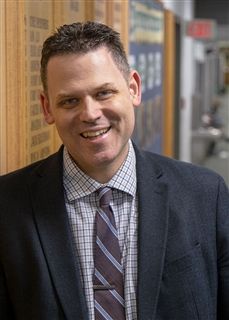 Dr. Arendt has a PhD in Education from OISE, University of Toronto. He received a Masters degree in Teaching and a Bachelor of Arts in Literature from Louisiana State University. He joined Crescent in September 2013.

How did your teaching career begin?

What motivated you to become a teacher?

It wasn't so much a “motivation” as it was a relentless calling, as idealistic as that might sound. I also had a tremendous role model in my mother, who was a dynamic and caring teacher.  I initially entered university as a petrochemical engineering student at Louisiana State University. I became bored with the coursework in engineering (it just wasn't me) and decided to jump to the field I found most challenging in high school, which was English. From there, it was a relatively clear path toward teaching high school English, which is something I truly love.

What is your philosophy of education and how do you apply it in your classroom?
My overarching goal is to situate what we are reading with the world around us. What does a work, no matter how old or seemingly removed from our contemporary condition, have to say about where we find ourselves right now? I believe that the lifelong journey of self-discovery is among the most rewarding odysseys we can undertake. So, finding works that speak to different dynamics of self and society are of primary importance to me. How does the fictional town of Maycomb, Alabama in the 1930s relate to my hometown in Louisiana in 2018? To the GTA in 2018? How does Hamlet's internal wrestling and doubt resemble our grads deliberating over a university program? How does George Orwell’s 1984 speak to issues around propaganda and critical media literacy in our multitextual world?
I also believe that storytelling is an integral way to know ourselves and others. It helps us move beyond stereotypical and essentialized views of the other. So, I tell a lot of stories.

Inclusive and Just is probably the one that is most present in my classroom. For example, when we tackle To Kill a Mockingbird, I speak about issues around educational and racial segregation in today's world. Sadly there are many current issues, whether it's black students subjected to poorer educational experiences in the American south, the injustices directed toward aboriginals in Canada or police discrimination here in the GTA. The concept of inclusivity extends beyond the practice of diversity. Diversity is but a step toward inclusivity, which is a more goal-oriented purpose.
Modern and Relevant is another. As I noted above, my attempt to connect a work written in 1600 to our world in 2018 is paramount. The way in which these texts speak to us today may be different than how they spoke to the audiences when the texts were written, but they speak to us nonetheless. There are modern dilemmas embedded across all texts we read.
I also think the question "Who am I?" is significant and central. It's why I focused this year's AP Literature course around existentialism. It took me a while to admit what I wanted to do with my life and who I truly was. But once I discovered my path, I've been able to live a life free of regret and full of joy. But I didn't arrive here without some very serious and honest admissions to myself and without facing some difficult realities.

Describe the pedagogy style which best suits you.

I pride myself on being a relational teacher. I try to engage students on a personal level, in one-on-one contexts whenever possible. And I try to be aware of their interests outside of my class (for example, sports, film or technology). I also share my own experiences whenever possible to try and be a practitioner of that which I preach. I find I relate best with my students when I know a little bit about them beyond “student” and, in turn, for them to know a bit more about me than “teacher”.

In which ways do your students most benefit from the work done in your classroom?

I think that my passion for English is the thing that I try and embody most explicitly and unequivocally. I was a kid who loved and excelled in math and science when I was in high school and at university. It came easily to me and I was certain that it was what I'd be doing. But the more I did it, the more purposeless I felt. I found a challenge in books and my university experience gave me a love of fiction – seeing real, tangible value in it – and I want to share that love of literature and the power of the written word with my students. So, I hope they identify the importance of loving what you do, being passionate about your work, and seeing connections across things they might not have before.

Describe some of your interests outside of Crescent.

Cooking would be very high on this list. I grew up hunting and fishing in Louisiana and, from a very early age, I learned how to clean and cook what we'd caught. Being able to make a proper Cajun jambalaya, gumbo, fricassee, sauce piquante, etc. is important to me – culturally, too. Raising my children in Canada, I want them to know and be able to taste their Cajun roots. I enjoy sports, particularly football. I also enjoy playing video games.

What might surprise people most about your journey to Crescent?

At the same time that I was under consideration for the job here at Crescent, I was auditioning for season one of Masterchef: Canada. I made it right up to the final cut for the national broadcast, having passed a few initial rounds of cooking, interviews with producers and tests.

In 2004, Dr. Arendt was named District Teacher of the Year in Katy School District, a large school district in West Houston, Texas. He has contributed chapters to textbooks ("Seeing 'What We See': Beyond Projection and Representation of Criminality in Mainstream Media" for the International Textbook of Semiotics); articles to academic journals ("[In]Subordination: Inmate Photography and Narrative Elicitation in a Youth Incarceration Facility"); and presented at national conferences (e.g. A New Vision of Black Freedom conference hosted by Columbia University). His thesis, Are The[se] Kids Alright?; States of Incarceration and Subordination in the Learning and Lived Experiences of Youth in a Juvenile Detention Facility, was published in 2012.
Back