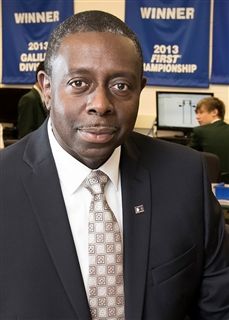 4/27/2016
Dean of Studies
When David Grant was appointed as Crescent School’s Dean of Studies in Fall 2015, he inherited a spacious, centrally located office. But another room holds a special place in his heart: the original location of Crescent’s technology lab.

It was in the tech lab (Room 252, now the site of the Margaret Donnelly Library), that Grant saw that the hands-on work of designing, building and testing robotics devices engaged Crescent boys in a powerful way. He became a passionate advocate for the potential of robotics in education.

Grant joined Crescent’s science and technology department in 1992, after teaching in his native U.K. for 10 years. With the support of Crescent’s leadership and his colleagues, he launched Crescent’s robotics program and initiated the technological design program.

In recognition of Grant’s innovative use of technology in education, he was awarded a Certificate of Achievement from the 2015 Prime Minister’s Awards for Teaching Excellence.

Grant also fostered the popularity of robotics competitions in Canada. As founding board member of FIRST Robotics Canada and a director of FIRST Lego League Ontario, he helped create competitions that led to school robotics programs across Canada. From just three teams in 2000, there are now 160 FIRST Robotics teams and more than 700 FIRST Lego League teams across Canada.

“I will always take pride in my contribution to the robotics program,” says Grant. “It has impacted the lives of many students over the years.”

Robotics is now firmly embedded at Crescent, both as a signature part of the curriculum and as a popular co-curricular activity. Crescent’s Team 610 won the FIRST Robotics World Championship in 2013 and continues to rank high in international standings. Grant has earned a well-deserved reputation as a master teacher. In April 2015, he was the keynote speaker at the “Boys as Makers” conference hosted by the International Boys’ Schools Coalition conference in Cleveland.

Now, as Dean of Studies, Grant is responsible for Crescent's academic program (Grades 3 - 12).

“I’m excited by the opportunity to contribute to Crescent in a different capacity and having a positive impact on the education of all the boys,” he says.

Grant knows first-hand about the pressure parents can feel about their sons’ education. He is the proud father of two boys. Jordan graduated in Crescent’s Class of 2014 and is now studying at the University of Waterloo. Ryan is attending St. Lawrence University, where he is a top player on the varsity soccer team.

“Your son is a completely unique individual and will follow his own path,” says Grant. “Try not to worry, just enjoy and support. He will be fine. Your son is in a good place.”

While many things have changed since Grant first began teaching at Crescent, he says one thing remains constant.

“Despite the incredible advances in educational technology and resources, the student-teacher relationship is at the heart of good education,” says Grant. “The care and professionalism we apply to our work are crucial to the boy, parents and school, and ultimately to the society at large.”
Back