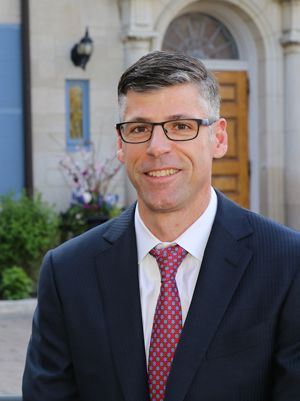 2/8/2017
Jamie says his Crescent experience played a big role in his life – one that continues today with his son.
“Crescent challenged me to try harder and put more effort into everything I did,” says Jamie Coulter '87, P'21, who became a Crescent boy in Grade 5. “I learned self-discipline from my time at Crescent, a trait that helped me through my university studies as well as my career.”

“I enjoy a lot of sports, such as mountain biking, skiing and triathlons,” says Coulter.

He also studied music at Crescent, which led to some cumbersome commutes to and from school.

“I joined the cross-country ski team in Middle School and stayed with it until graduation,” says Coulter. “For some reason, I also chose to play the cello. There were many winter days when I was lugging both my cello and my skis to school on the TTC.”

Coulter shares his love of active pursuits with his family. He met his wife, Yuri Ma, at Queen’s University; they celebrated their 20th wedding anniversary last year. They have a daughter, Alex, and their son, Owen, who is a student at Crescent.

From 2016 to 2019, Coulter served as Chair of the Alumni Executive, and then took on the role of Chair of the Crescent School Board of Governors starting in 2019.

Coulter first got involved with the Alumni Executive in 2000. “I was looking for ways to reconnect with friends after having lived in B.C. for the previous seven years,” he says.

He participated in the 2001 Alumni Golf Tournament and then was part of the group of alumni in 2002 who created what is now known as the Pat Mills Family Class of ‘87 Bursary.

“I’m proud to report that it is the largest class fund at Crescent and has provided financial support to many great young men,” says Coulter.

Coulter, who celebrated his Class of 1987’s 30th anniversary reunion in 2017, often connects with his alumni brothers. He says Owen’s school functions often feel like mini-reunions, because many of his former classmates also have sons at Crescent now.
Back