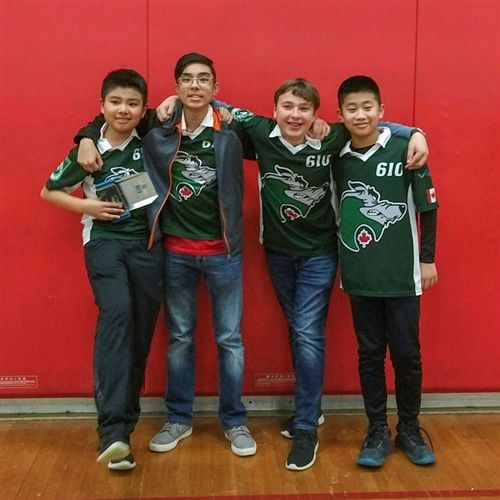 12/19/2019
Eight members of Crescent's Middle School Team 610 are heading to the provincial tournament after an excellent showing at the VEX IQ tournament held at Runnymede Collegiate Institute on December 14, 2019.

Crescent sent 10 four-member teams to the tournament, eight from Middle School and two from Lower School. There were 38 teams competing overall at the tournament, and only five teams qualified for the provincials.

Team 610A (Grade 8 students Eric Mao, Yusuf Lum and Connor Macmillan and Grade 7 student Andi Song, shown left to right in photo) won the Excellence Award. The highest award presented in the VEX IQ Challenge, the Excellence Award honours a team that exemplifies overall excellence in creating a high quality VEX robotics program. This team is a strong contender in numerous award categories. Team 610A qualified for a spot at the provincials.

Team 610B (Grade 8 students Ken Cheng, Jason Teng and Jason Yee and Grade 7 student Owen Ford) won the STEM Research Project Award, which also qualified them for a spot at the provincial competition. The STEM (Science, Technology, Engineering, and Mathematics) Research Project Award is presented to the team that shares the most effective STEM Research Project presentation. This presentation, as well as the follow-up discussion with judges, effectively demonstrates the students’ significant depth of understanding of their topic and research findings.

"We're very proud of all the boys for their efforts at this tournament," says Crescent's Robotics Technician, Tony Qian. "This was a big win for Crescent."